Metamorphosis at the Iona Gallery

Just a few more weeks of the summer break to go until art group meets again, but there’s still plenty of art shows going on.

One upcoming event is the Broderie Alba exhibition, Metamorphosis, at the Iona Gallery in Kingussie.

These ladies all studied at Dundee and joined together as a group in 1996. They have had several successful exhibitions around Scotland, and despite diverging lives, they have all kept in touch.

This new exhibition has evolved over 18 months of collaborative work, rekindling their love of textiles, art, designand embroidery.

And, as a contrast to their work, the group has invited Rob Christie, of Caithness, to exhibit alongside them. Rob works with wood and produces large vessels and platters.

The show starts on August 17 and runs until August 24.

The group will also be holding a charity event, Cakes in the Garden, to coincide with the exhibition. This event, which supports the Teenage Cancer Trust, will be on Sunday August 21 from 2pm until dusk, at Glencairn, Old Glen Road, Newtonmore, PH20 1EB. 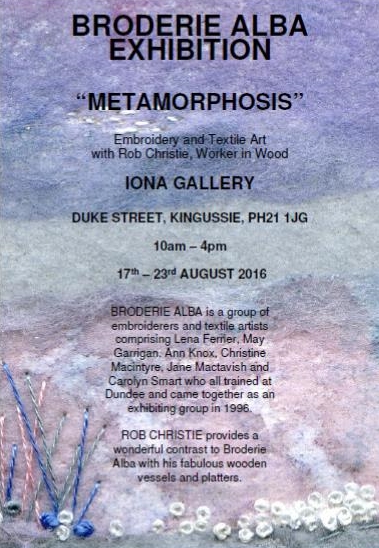