This week Angus challenged everyone to pick their favourite media and work from the same source. He chose the Old Spey Bridge at Grantown and provided a number of different views. Some showed the whole bridge, some just a section, while one photo even had ivy obscuring the structure almost entirely.

A busy class took to the task with gusto and there was huge variation in approach. Among the media on the go was pencil, pastel, acrylic, collage – two members even got their lino-cutting tools out. We’re looking forward to seeing how their prints turn out.

In an extra twist, at coffee break time everyone had a wonder round the room to look at other’s work. Then Angus opened up a discussion where people had to say a little bit about an element of someone’s work that they liked and how they thought it could improve their own piece. Despite a bit of embarrassment in having to speak out loud (it was like being back in school), everyone had some inciteful things to say. Many admired the freedom which people brought to their painting, while some wanted to emulate the tight detailed brickwork achieved in other works. 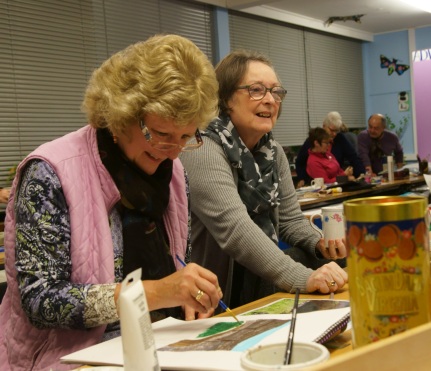 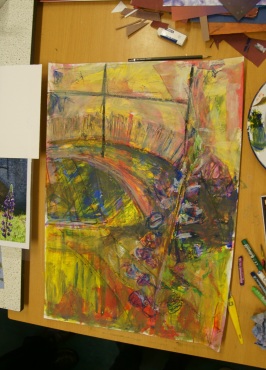 Group will be encouraged to sketch unusual viewpoints of this often painted landmark. Bring your favorate sketching media. watercolour and water soluable pencils encouraged but not essential.

I will provide some foldy chairs and a choice of “smidge” or “skin so soft”.

This entry was posted in Group outings, Sketching and tagged Old Spey Bridge.